The lions or the light ?

An excited voice crackling with static comes through the radio announcing a sighting of a lion and cubs with a kill.  We are bouncing along a rutted track in the Thanda Reserve, it is about an hour before sunset and so cold we are all cloaked in jackets, hoodies and fleece lined ponchos. All you can see are our eyes.

In a perfect world, the lions, cubs and the kill would appear, framed by an acacia tree and bathed in golden light, perfectly composed for an iconic African Safari shot.

Back to reality, we chose to continue looking for the lions and tried to capture the light by clicking away as we drove. This rarely results in a good shot, and this time was no exception.

We passed Gnu’s doing their crazy running thing, we saw zebra and impala hanging out together at a waterhole and a giraffe in the distance. But no lions.

The sun went down, the temperature dropped, and we headed back to our tented camp. 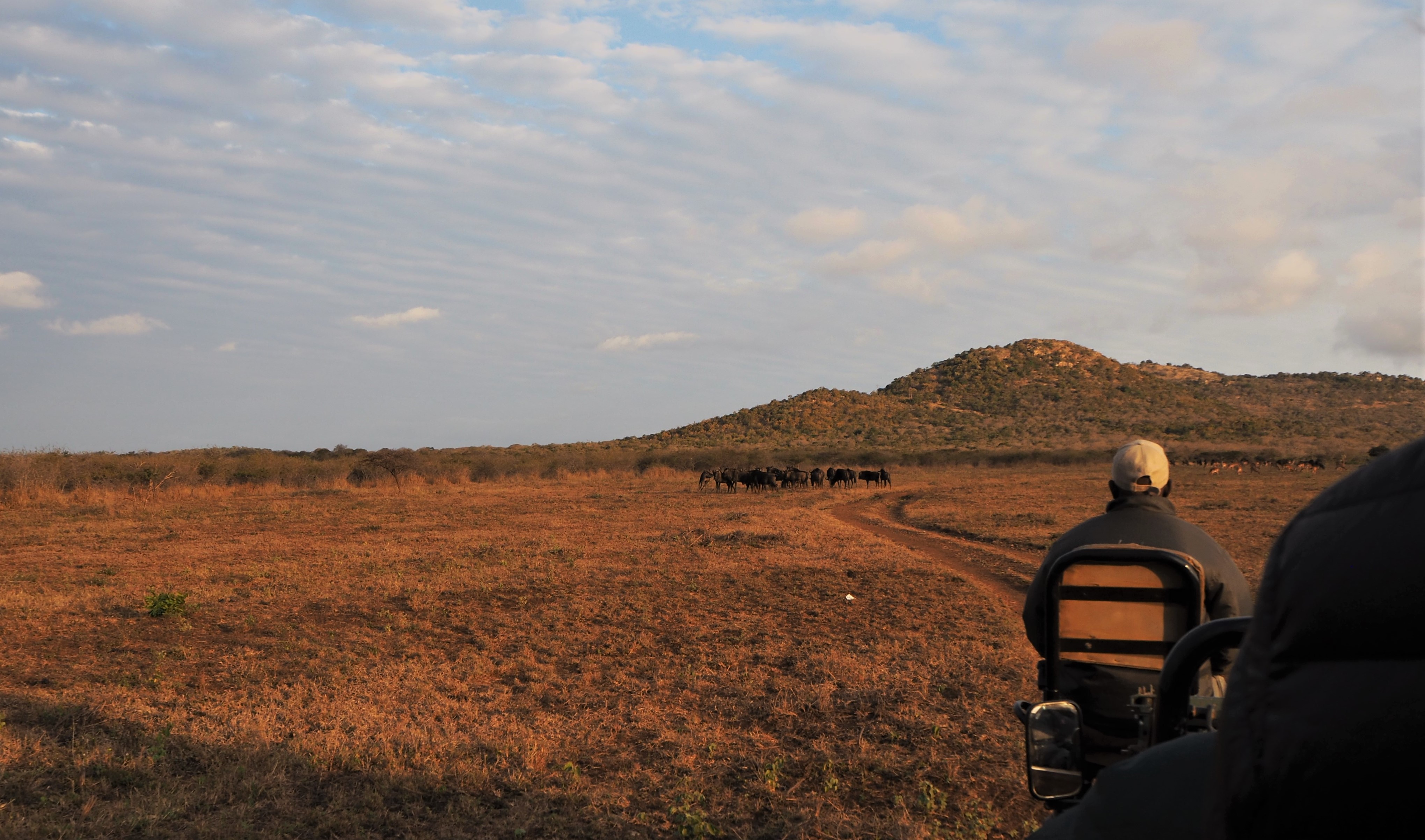 The end of the magical light at Thanda

Thanda means love in isiZulu and what is not to love about 140 square km of African bushveld. Gentle hills surround open plains, forested areas and thickets are home to creatures great and small, and the Thanda guides have an affinity with this land and a passion for leading you in to their world and the wonders of nature.

“Hurry, hurry has no blessings “this Swahili proverb is very apt when applied to a game drive at Thanda. Slowly is in tune with the rhythms of nature, slowly is not blinded by the Big 5 at the exclusion of all else, slowly allows for the excitement and anticipation of what might unfold, while allowing time to appreciate the present.

“Adopt the pace of nature, her secret is patience “writes Ralph W Emerson

Matthew and Zakes our Thanda guides, must have this quote etched on their souls.  Our game drives with them were a total immersion into the natural world. The wonderful African bush at Thanda in KZN.

In awe of trees.

Thanda has many magnificent trees but the Acacia xanthophloea was my tree of the trip.

While I am not an ageing hippie, I have developed the habit of embracing trees as they have an energy that is extremely positive and comforting. I have also been known to lick trees, but only when I am with Anje Rautenbach, and so far, all trees have tasted the same.

Back to the Acacia; this tree with its light yellowish trunk and wide feathery canopy has stories to tell.

Matthew is as fascinated by this tree as I am and leaning against the Land Rover sipping hot coffee he tells us all about it.

Back in the day when the first white folks were trying to tame Africa, they named the Acacia the Fever Tree as they were convinced it was to blame for their malaise when they were near them. The fever tree is guilty only of being in the same swampy area as the anopheles’ mosquito, that annoying bug whose bite gives us malaria.

Loved by weavers and other birds as the thorns protect their nests from snakes, giraffe and buck are fond of snacking on the seeds and seedpods. When the tree detects that it is being chewed on, it kicks into protective mode in the most remarkable way. It sends bitter tasting tannin into its leaves making it unappetizing to the animals, while releasing ethylene gas through the pores on the leaves. This gas warns the other Fever Trees that there is a threat and they can send the tannins to their leaves too.

Even more remarkable is that the saliva of animals that eat the leaves acts as a catalyst to produce the hormones that repel the grazers, as well as other hormones that stimulate growth and heal wounds in the tree. These tiny leaves are brilliant at repelling danger, but are too small for effective photosynthesis, this occurs in the bark of the tree.

Next time you see a Fever Tree, look for a blackened or dead looking branch. This is known as the sacrificial limb which the tree develops to deposit any unwanted nutrients or toxins absorbed through the soil.

I love the fact that trees communicate and are so clever.

The words of Kahlil Gibran float into my brain and I nod and smile in agreement.  “Trees are poems that Earth writes upon the sky” A fever tree dominates the view

The rhythm of life at Thanda.

A cheery call of “Good morning” tells me it is 5:15 am and I have 15 minutes to get ready for my escort to the dining room. Walking without a guide is not permitted in the tented camp in the dark due to the wildlife and the chaos that could ensue should a guest and an animal go bump in the night.

Steam swirls up from the coffee mug warming my hands, sleepy faces yawn and smile, mouths chew rusks on autopilot, and we all jolt fully awake when Matthew and Zakes arrive calling for us to get into the game vehicle.

It is dark, and the lack of visual intrusion allows us to smell the earth and the peppery scent of the bush, hear the brush of a branch, the hint of the crackle of leaves being disturbed by something unseen.

Slowly the light kills the night and the sounds become recognizable. We stop to examine dung, it’s fresh, we search for tracks, find and follow them until they disappear into the brush. We pause to marvel at a communal spider’s web glistening with dew, a dung beetle hard at work and a herd of buffalo with a young calf slowly starting their day with yawns, tail swishing and morning grooming by the colourful oxpecker birds. We bounce and jolt over a small ravine and sit in reverent silence as we observe an elderly male lion scratching himself against a tree, stretching out like a yoga guru before turning to face the sun in a happy pose worshipping the warmth.

We stop to watch as two male impala lock horns in a fight for control of the female herd and at around 8 am we stop at a watering hole for a leg stretch and coffee. The sun has forced its way through the clouds and we bask in the warmth of a new day. Around 9 am we make our way back to the camp for a large breakfast and to ask questions and share stories with Matthew and Zakes.

The next game drive is at 3pm so a few of us head to the Boma for some mindless gazing at the views over coffee as it was a bit too chilly to contemplate a reviving swim in the infinity pool. A spa treatment puts the finishing touches on the total relaxation I experience after a day or two in the bush, and a light lunch is announced just as I start to feel hungry. There is time to go back to my gorgeous giant tent for an outdoor shower before kitting up in layers again for the evening game drive. Views from the boma at Thanda

This time sundowners in the middle of a vast plain include bush coffee, a marvelous concoction of coffee and Amarula liqueur, served in a tin mug and sipped while competing in a local tradition that involves spitting dried out buck droppings, the winner being the one who achieves the greatest distance. The competition was fierce and the run ups, mouth swirling and head tossing was serious business. I failed miserably but we certainly had a good laugh. Returning in the dark Zakes sweeps his torch back and forth, we are hoping to get a glimpse of the elusive leopard as this is the time when he comes out to hunt. The torch catches a flash of black and white, Matthew kills the engine and Zakes manages to keep his beam on the moving target. Not a leopard but a magnificent spotted eagle owl in flight. We watched as she swooped low across the plain before alighting on a nearby tree where she perched and posed, blinking at us. What a way to end an amazing day in the bush.

This is what Thanda is all about. Good food and comfy tented accommodation, a pool and spa and bar to relax, but mainly it is six or more glorious hours a day in the veld.

A shower to wash off the dust of the day and then we head to the bar for drinks, a game of scrabble or cards and the call for dinner which is a sumptuous affair. The staff come out and perform a very impromptu Zulu dance amidst much hilarity and discussion, each man having his moment centre stage to show his moves, some more energetic than others.

Coffee and a nightcap and by 9pm bed is calling, as we need to be rested and ready for the 5;15 “good morning” call. Sunset over the plains at Thnads

On our last day I decided to skip the morning game drive as rain was forecast and I was not keen to wake up at 5am only to find the drive washed out. Tessa bravely opted in and was the only one on the vehicle and she was rewarded greatly for her efforts. A trio of elephant appeared out of the bush and practically climbed into the game vehicle for a chat with her. She captured incredible footage of it with her phone. It was a once in a lifetime moment.

It can be accessed via the international King Shaka airport at Durban, followed by a 220km drive, mostly on the national road, or via O R Tambo J International Airport in Johannesburg followed by a drive of 440km.

The airport at Richards Bay is just under 100km away from Thanda.

The Lodge offers a 5-star experience in 9 bush suites and Villa iZulu caters to celebrities, families and those seeking privacy in an exclusive bush residence of extravagance and service. The Thanda Tented Camp offers 15 grand tents set along secluded forest pathways and a communal dining area, bar, pool and shop. Inside the luxurious tent.
Image courtesy of Christian Sperka Thanda is serious about the preservation of the Zulu culture and supports many projects in the area.

The reserve is committed to conservation. Annual grassland assessments and animal species counts are done to ensure a healthy sustainable balance is maintained. Thanda works closely with organisations like the Lion Management Forum and the Endangered Wildlife Trust.

Thanks to Mango Airlines for getting me from Cape Town to KZN and back. I used the handy Mango app for the first time and it really makes life easy. Free in-flight Wi-Fi, check in, book your seat, get your boarding pass and have access to specials and promotions, all via the little orange icon on your phone. Download the Mango app now.

Thanks to all at Thanda for hosting me and a special thanks to Matthew and Zakes for being extraordinary guides.

As always, opinions are my own.