Saldanha Bay. Where nature is raw and people are real.

The deepest natural harbour in the Southern Hemisphere is situated in Saldanha Bay, 140km from Cape Town on the Cape West Coast, and a mere 22 km North of the upmarket tourism mecca,  Langebaan.

Saldanha is a working town of many contrasts.  There are areas that look decidedly unloved, others of great natural beauty that are dominated by huge industrial plants from the commercial fishing and steel industries that sustain the local economy.  The SA Naval Training base adds a strong military flavour to this coastal community.

There is a sense of being on an island as the sea is often visible in more than one direction. In parts the landscape is appealing with its rugged plains and fynbos rich hills, but the first impressions of Saldanha do not reveal the depth of natural and cultural offerings. The Cultural Heritage Centre is the logical first stop in Saldanha.

Old photographs, artefacts and documents will provide great insight into the town and its multi layered history. The highlight is the curator Linda and her stories.  She brings the past to life with tales of family sagas and war stories, the local heroes and the apartheid era. She describes everyday living as a worker in the fishing factory, and revives the horror of shipwrecks and fishermen lost at sea.  She answers any question you pose to her.   Linda was the first of many locals I met whose passion for the area fuelled my desire to get to know their Saldanha. To book a visit to the Cultural Heritage Centre please contacts Linda Prezens on 073 492 7815. When hunger strikes you can drive, sail or kayak to the Slipway Restaurant in the Saldanha Bay harbour. Partially hidden by a large ship in the dry dock this eatery is a place where you could spend all day. It has a fully stocked bar and the seafood is so fresh you wonder how you missed seeing them catch it.

The outside deck looks out over the bay where there is always some activity going on, or you can pass the time chatting to the owner Diane Schaafsma. Not only does she have a passion for Saldanha, Diane and her late husband, Robert, were also adventurous travellers. They have circumnavigated Africa in a yacht, sailed all over the Mediterranean, and encountered pirates in the Red Sea.  A Kombi Camper van was their home when they explored Europe and they have travelled to many of our neighbouring countries on safari. So yes, do chat to Diane, she is  not your average restaurateur, and can certainly talk about much more than food. If you were any closer to the sea, you would be in the water.

The beachfront lodge has an interesting history and has grown organically from a modest single dwelling to the grand beach resort it is today.

In the very early 1800’s a man called Dirk Kotze built himself a shanty cottage on a sand dune. He had many kilometres of beach and fynbos to himself, his only living neighbours were snakes, scorpions, moles, steenbok and bat eared foxes. Life was obviously tough and he eventually vacated the cottage and it quietly decayed, alone and unloved until the early 1950’s.

In 1953 Henry and Babeta Wicht bought the farm Pienaarspoort, and on this land stood the remains of Dirk Kotze’s home. Henry and Babeta used the bones of this cottage to create their family home, adding on as their family expanded to 9 children. The original homestead in now the 16 roomed lodge and is owned and run by Andre, one of the 9 children who grew up there. Over the years Andre has grown the lodge to the resort it is today, adding suites, self-catering cottages, tennis courts, a swimming pool, hall, conference centre and the children’s play area.  http://bluebaylodge.co.za Mart-Mari is not only the Marketing manager for the lodge; she is also a third generation Wicht.

Her pride in the lodge is evident and she has clearly grown up on stories of what it was like in the early days, and she has her own dreams of how it will continue to grow to meet the future.

Her gorgeous dog, Crispy, is just as proud, and clearly loves living here with a beach as his playground.

There is a sign in the dining area that is obviously obeyed by all. It reads “BE NICE, OR GO HOME”

Blue Bay Lodge offers relaxation, action, and nature in equal measures. Just get there, and let the rhythms of the surroundings dictate your pace.

They are presently running themed specials that include “Cycling & Hiking”  “Health & Wellness Getaway”  “Making Memories, a family break” and a “Besties Weekend”  They all sound very appealing especially when you know they will include great dollops of West Coast hospitality.

Two hundred years ago French explorers were astonished by the “impenetrable clouds of birds of all sorts and colours” and today while numbers might have diminished, the birdlife in the mornings and evenings is still quite remarkable.

An early morning mission to catch the sunrise was not to be, as the fog was so thick the horizon disappeared and it was impossible to tell the sand from the sea, or the sea from the sky.

The whole world was grey, and silent. And then the birds appeared. A never ending flow of black and white action. Swooping, diving, calling, gliding, gathering in in groups, showing off I think.  Magical, mesmerising stuff.

They were so thick on the ground that I abandoned my beach walk and sat and just watched as they flicked in and out of sight in the cold, grey nowhere.

After an hour of just watching, I decided the birds could share the beach with me. A walk along the beach to the reddish glow that is the massive steelworks, fed with ore from Sishen way up North, and transported to Saldanha on one of the longest goods trains in the world.

Again, Saldanha does not initially impress. The beach was not a pristine white holiday brochure. It was coloured in stripes of red, green, white and brown. A combination of seaweed, dying seaweed, completely dead seaweed, and flotsam dyed red from the emissions from the steelworks.

Surprisingly, there was not bad smell from any of this, and squatting down for a closer inspection revealed all kinds of fascinations. The dead white “stuff” was like a scribbled spider’s web, the green and red like a thin crust over the sand. Tiny creatures scurried and ate, and footprints of birds were imprinted in all directions in the sand. Mart -Mari took us on a walk and scramble along one of the many hikes that need to be explored. We started fairly high up, with outstanding views that are a big help in getting your bearings. As we slipped and slid over the loose stone, (I landed on my bum in the first three minutes) we saw the first few flowers making an early appearance. Flower season starts in July and I am told that the hills are an artist’s palette of colour then.

The path winds up and down onto the beach in parts, over rock pools and back up onto gorse covered dunes. The terrain and scenery are continuously changing.

As we walked I kept hearing a sound that was similar to the Noon Day gun, a canon shot fired at midday in Cape Town. Mart- Mari said nothing, grinned and kept walking.

We were now on a series of huge black rocks, and after cautioning us to be careful, Mart- Mari introduced us to Bomgat. (Literal translation is bomb hole)

Two huge rocks stand side by side, and a very narrow channel has been eroded between them. This channel opens into a wider pool. The waves drive the water into this narrow gap where it hits the wall and sprays high in the air. The noise that sounds like an explosion is from the water, the shape of the pool below creating the acoustics. It is very tempting to want to get really close, or even try to climb down a little way for a better view. The rocks are very slippery, the water sprays high in the air, so please be careful. Hang on tight to young children at this spot. But do go. It can be seen and heard impressively from a safe distance. The shape of the Bay and the weather conditions make for perfect sailing, kayaking and canoeing. Due to two four km long piers with an opening of just 800 meters between them, the bay is sheltered and can be enjoyed all year round. 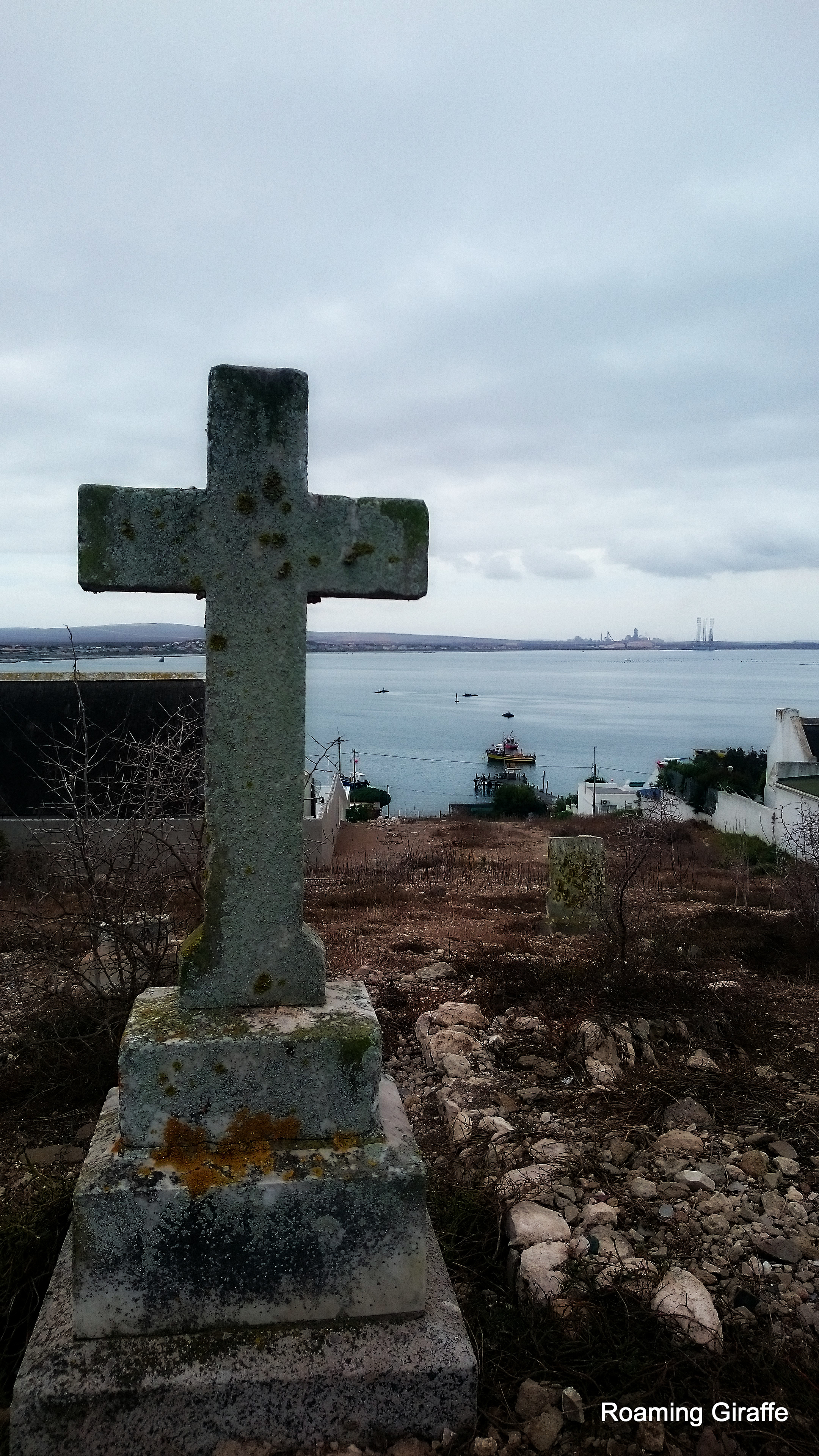 Travel on the R27 from Cape Town for 120km. Turn left at a sign marked Saldanha, Namakwa Sands Saldanha Street for 12 km then turn left again onto the R399. Drive for 6km to the centre of town.

For more information go to http://www.westcoastway.co.za/

Thanks to WestCoastWaySA and Blue Bay Lodge for hosting me and showing me this delightful town.